A Fort Lauderdale man arrested for identity theft is accused of heisting the identities of others in order to open store credit cards in both Broward and Palm Beach Counties. 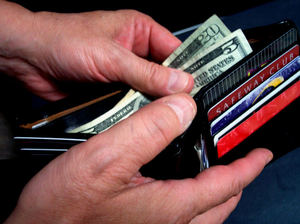 The investigation has been ongoing for a full year, since last April, when a Pembroke Pines man reported to police someone used his identity to open a store credit card at Nordstrom’s and charge thousands of dollars worth of merchandise to it. The alleged victim said he’d never been to the store and had never tried to open a line of credit with the firm.

Store managers told police the man opened the account with a driver’s license that contained the name, address and birth date of the victim, although the photograph was different. The store closed the account, and turned over surveillance video to officers. Using that information, police were able to spot the vehicle used by the suspect and got the license plate number.

The very next day, the suspect was at the same store and officers were there as well. A brief chase ensued, but the driver evaded police. It was later learned he was attempting to open another line of credit with a different identification card with a different name. However, that individual had fraud alerts set up on all accounts, and was notified immediately that someone was attempting to open a line of credit using his identity.

Although officers didn’t apprehend the suspect at that time, they later traced the vehicle as a rental loaned to a Hollywood woman. She had reported the vehicle missing and officers later found it abandoned. Officers questioned her and noted her accounts were conflicting.

Still, the investigation would go on for months while the suspect allegedly attempted similar schemes over the next year.

But officers didn’t make an arrest until recently. Suspect reportedly told police he’d gotten involved with a man and his sister who gave him phony identifications to open up store credit lines. He insisted he never actually put money on the cards himself, that the brother and sister were responsible for this. He also said the woman who reported the rental car missing was the sister.

At this point, she has not been identified publicly or charged with a crime.

Defendant, however, has been charged with grand theft, using another person’s identification without consent and organized fraud.

These are very serious charges, and will require the involvement of an experienced South Florida white collar defense attorney to mitigate the damage.

Similarly, producing or using counterfeit or fictitious personal identification information is a third-degree felony under F.S. 817.568(9), but can be charged as a second- or first- degree felony, depending on the circumstances.