If you are arrested on a Fort Lauderdale domestic violence charge while on probation, it may result in harsher penalties – and the need for a strong defense strategy. 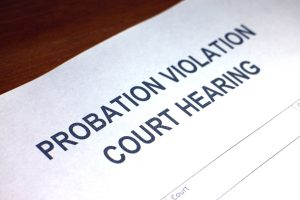 Probation is a form of alternative punishment that allows individuals convicted of an offense to fulfill the terms of a sentence while outside prison or jail. The oversight of a probation office or officer is supposed to serve the function of public safety, while allowing the offender the opportunity to work and contribute to society – in the hopes of rehabilitation and possibly victim restoration. The conditions of probation vary depending on the underlying offense, criminal history of the individual, and the judge who handed down the sentence. However, most terms of probation require the defendant to abide by all local, state, and federal laws.

When a new offense is committed by someone on probation, that person not only faces potential consequences for the new offense, but additional penalties for a probation violation.

While a criminal conviction may require proof beyond a reasonable doubt, probation violations aren’t held to that same proof burden standard. The probation officer/prosecutor only needs to show you violated the terms of your probation by a proof standard of “a preponderance of the evidence.” In layman’s terms, that means you more likely than not violated the probation rules.

As our Broward domestic violence defense lawyers can explain, you might evade a criminal conviction for the new offense but still be found to have violated your probation. And in that situation, you might be given the maximum penalty for the original underlying offense (the one for which you were on probation in the first place).

This is why it is so important if you’re accused of a probation violation to seek immediate counsel from a criminal defense attorney.

The terms of your probation will be unique to your situation, but a violation – even if not a new criminal offense – can lead to an arrest.

Simple domestic violence battery, as explained in F.S. 784.03, is usually a first-degree misdemeanor with a maximum penalty of one year in jail. However, the presence of certain factors can bump that charge up to a third-degree felony, which carries a maximum five-year prison sentence. For example, if the reason you’re on probation is for a prior conviction on a battery charge, you could be facing a felony rather than a misdemeanor for simple battery. You could also face felony charges if the alleged victim was pregnant or elderly.

But even if the new charge remains a misdemeanor, your probation officer may file a petition seeking to revoke your probation – which could send you back to jail or prison. In making this decision, a probation officer will consider the nature of the new charge, your actions at the time of arrest, your honesty about the charge, and the connection between the new arrest and the reason you’re on probation. If you’re on probation for domestic violence and are arrested on a new domestic violence charge, the likelihood of your being locked up is higher than if the new offense was something less serious and entirely unrelated.

If the alleged victim recants or refuses to cooperate, the case can still be pursued by the prosecutor – though the strength of their case will be substantially diminished. It’s possible if you’re on probation in this scenario that the probation violation petition won’t proceed either. However, it truly depends on the individual circumstances. In any case, do not discuss the new case – or an alleged probation violation – with authorities until you’ve had an opportunity to at least touch base with a criminal defense lawyer.