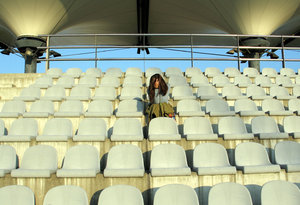 Fort Lauderdale criminal defense lawyers understand the situation dominoed for the professional football player after an argument with his wife earlier this month.

According to the Sun-Sentinel, he could be facing a misdemeanor domestic violence charge, though it will be the state attorney’s office that will decide whether to formally file charges.

Apparently, the pair were arguing because Johnson’s wife found a receipt for condoms in his vehicle. Broward police officials say that the verbal argument escalated, and that Johnson reportedly leaned over to his wife and head-butted her, causing her to suffer a three-inch gash on her forehead.

She reportedly fled to the home of a neighbor, who called 911. Interestingly, according to the New York Daily News, the neighbor requested that officers “keep it quiet” and “not to make a big scene,” as it involved a high-profile individual. Of course, requests like this almost always go unheeded.

The 34-year-old player was charged with simply battery domestic violence.

Once word made it to the media, the news went national – and the repercussions began. He at first released a statement saying that it was his wife who had head-butted him, and that he drove away to allow her to calm down.

However, she quickly refuted that and subsequently filed for divorce. Then, VH1 dropped a reality show about the pair, which was slated to debut in September. Then, the Miami Dolphins, who had just signed him for $925,000 a year, terminated his contract.

Though he has not been arrested since he began playing the sport professionally in 2001, he was arrested in college in connection with a domestic dispute.

This is an extreme example of how allegations can quickly affect almost every aspect of your life. Most of us don’t have pending reality shows or NFL contracts – but we do have jobs and children and family relationships that can all be damaged or even severed simply by the allegation. That’s why having an experienced lawyer on your side is so critical in these cases. It’s not just about your reputation, it’s about your freedom and your future.

This case, like so many other Fort Lauderdale domestic violence cases, hinges largely on one person’s word against another person’s word.

Simple battery is considered a first-degree misdemeanor under Florida law, which means it’s punishable by up to 1 year in jail, 1 year of probation and a $1,000 fine. The basic definition is that you intentionally touched or struck someone else against their will or that you intentionally caused bodily harm to another person. It can be something as minor as grabbing someone’s arm. It’s not necessary to the prosecution that the individual actually be injured, though it will bolster the case if the alleged victim does show physical signs of injury.

With domestic violence battery, which is defined as any battery committed against a spouse, family member, household member or someone with home you share a biological child, you face additional penalties. These include a mandatory minimum of five days in jail, completion of a 29-week batterers’ intervention program and you will be ineligible to have the arrest ever expunged or sealed.