Defense attorneys for a Dania Beach cab driver had always insisted he was innocent of the fatal hit-and-run of a homeless man. Prosecutors nabbed the wrong man, and the evidence pointed to a perpetrator still on-the-loose. 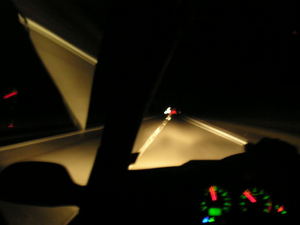 However, Broward State Attorney’s Office leaders insist they have the right man. The problem, they say, is the new precedent set by the Florida Supreme Court in Florida v. Dorsett, which shifts the standard of proof in hit-and-run cases when it comes to knowledge that someone has been hit. Before Dorsett, prosecutors needed only to show accused knew or should have known he or she had struck someone. But now, they must prove the accused’s knowledge of this fact beyond a reasonable doubt.

Here, they say, they simply couldn’t meet this proof burden.

According to news reports of the case, the former taxi driver was alleged to have killed a 62-year-old homeless man, who was allegedly laying intoxicated in a southbound lane of a highway in Dania Beach.

The assistant state attorney insists it was the taxi driven by defendant that killed the decedent. He asserted the case for hit-and-run was provable – until the Florida Supreme Court essentially changed the law. The prosecutor called defendant “lucky.”

Anecdotal evidence – such as this case – seems to indicate we could see fewer hit-and-run cases filed in Florida because it will essentially be tougher for prosecutors to show the driver was guilty of knowingly leaving the scene of a fatal crash.

In the Dorsett case, defendant was accused of leaving the scene of a crash in Boca Raton in the summer of 2013 that nearly killed a 15-year-old skateboarder. The teen suffers from traumatic brain damage and other serious injuries.

Authorities alleged defendant drove his large pickup truck right over the teen and then fled without stopping. However, defendant insisted he was blaring his radio, and he had no idea he struck the teen until officers stopped him three miles from the scene.

Defendant was convicted and sentenced to two years in prison. His attorneys appealed the conviction before Florida’s Fourth District Court of Appeal, arguing the law as it was applied was unconstitutional. The 4th DCA agreed, tossed the conviction and ordered a new trial. The appellate district also asked for the Florida Supreme Court to review the case.

That ruling in February, said the Broward prosecutor, made it immediately apparent that the charges in the Dania Beach taxi driver case had to be dropped. The prosecutor called the issue of the new standard “insurmountable.”

The 60-year-old defendant cab driver said he was working the overnight shift at the time decedent was killed. However, he insists he has no memory of hitting anyone or even anything that night. “I know I didn’t do it,” he recently told a reporter.

Investigators with the Broward County Sheriff’s Office say they pinpointed defendant’s vehicle because a similar car was seen on surveillance video driving through the intersection near where decedent was hit around the exact same time. However, those investigators didn’t take note of any damage consistent with a crash on defendant’s vehicle and a video camera on board activated by motion was not activated.

On the flip side, there was human tissue and decedent’s DNA underneath the taxi, and there was a paint chip on decedent’s chest that reportedly matched a missing paint chip from the taxi bumper.

Investigators did say it was not clear why pedestrian was lying in the road in a position where a “reasonably-minded person” would not expect to find a pedestrian. Decedent’s blood-alcohol level of 0.22 percent. However, authorities say defendant knew or should have known he hit someone and was thus required to stop.

He was arrested on charges of leaving the scene of accident involving death – a felony. The taxi driver had only been on the job five weeks at the time of the crash. His defense attorney called the prosecutors’ actions in this case a blatant attempt to “shoehorn” an innocent man.

Our Fort Lauderdale criminal defense lawyers know that while these cases may become tougher to prove, it doesn’t mean you should seek immediate legal representation if you find yourself under investigation. The sooner you have the protection of an attorney the better your chances of avoiding mistakes that could cost you dearly in the long run.