Two insurance underwriting company employees were arrested in Hollywood, accused of embezzling at least $25,000 but possibly as much as $80,000 from the firm. 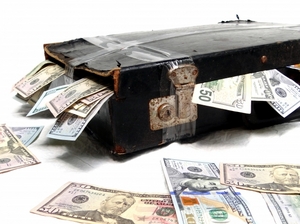 The workers, age 31 and 41, are accused of taking some customer’s monthly cash premiums and pocketing them, while at the same time recording the payment was made to the business.

Problems arose, however, when deposits fell short of the recorded amounts. One woman is accused of taking $16,000 and another $7,000. Another $1,700 was paid by a customer to one of the women, though he could not remember which. Detectives say the investigation is ongoing, and it’s probable more charges will be filed as more information becomes available.

Defense attorneys for the women told Sun Sentinel reporters each was innocent, and there is a much larger scheme going on to which they were not parties. However, the owner of the company told police both women had confessed to him when he confronted them about the disparity in the deposits. They began to write checks back to him to replace the money they’d allegedly stolen. He said thus far, they had written reimbursement checks totaling $3,400.

Still, the women face felony charges, and the penalties could be especially severe if the total turns out to be closer to $80,000.

That’s because Florida laws pertaining to embezzlement are directly tied to the amount of goods, valuables or cash that is stolen.

So it’s not solely the stealing of someone else’s money, it’s the unique violation of trust.

The crime of embezzlement in Florida is charged under Fl. Stat. 812.014. This is the provision of law that covers theft, robbery and related crimes.

A person will be charged with a first-degree felony, punishable by up to 30 years in prison, if property stolen is valued at $100,000 or more or is stolen as a result of and during a governor-declared state of emergency.

Second-degree felony charges will be filed in cases where a person steals property valued at between $20,000 and $100,000. This charge would also apply in cases where the stolen property is characterized as law enforcement or medical equipment valued at $300 or more or would otherwise be a third-degree felony, but was stolen because of and during a governor-declared state of emergency. Additionally, a person who coordinates with one or more other individuals for the purposes of embezzling money or property that is valued at more than $3,000 is also a second-degree felony. This charge carries a maximum 15-year sentence.

Our experienced Broward criminal defense attorneys understand successful defense of these cases requires a dedicated, knowledgeable legal team prepared to fight for your rights and interests.