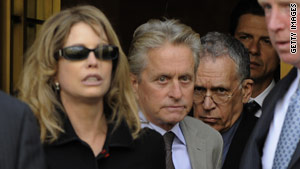 Douglas was arrested at a Manhattan nightclub in July of 2009. At his sentencing he begged with the Judge for a lighter and more reasonable sentence. He stated, “I believe, your honor, things will be different this time,” he added. If given a second chance, he said, “I will never squander that opportunity.”

Although the Judge received numerous letters from many celebrities begging for leniency for Douglas, U.S. District Judge Richard Berman appeared determined to issue the 5 year sentence.

The Judge appeared unmoved by many of the celebrity letters. In fact, he stated that many of the letters implied that Douglas should not be made an example of just because he is the son of famed actor Michael Douglas. The Judge went on to state that, “None acknowledged appropriately the numerous impacts to victims of society for dealing drugs.”