Many Americans hold their Second Amendment rights dear. But if you’re convicted of a Florida domestic violence offense OR you have a final domestic violence/stalking injunction against you, the right to bear arms goes out the window. In fact, buying or possessing firearms or ammunition post conviction or while you are subject to a Florida domestic violence injunction can result in serious penalties – including years behind bars. In some cases, federal authorities may get involved – even if the underlying injunction or conviction was issued at the state level. It is imperative if you’re accused of a firearms violation while subject to an injunction that you seek immediate legal counsel from a qualified defense attorney. 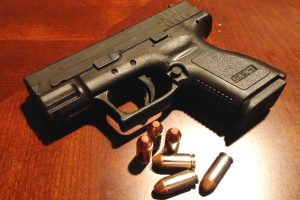 Case-in-point: A U.S. District Court judge recently sentenced a man to more than 3 years federal prison for possessing firearms while subject to a Florida domestic violence injunction. According to the U.S. Attorney’s Office for the Middle District of Florida, the 44-year-old defendant was subject to a domestic violence injunction issued by a state judge in Jacksonville. As part of that injunction, he was forbidden from purchasing or possessing any firearms or ammunition while the order was in effect. This directive was expressly communicated to him in the injunction, which noted failure to abide this rule was a violation of both state and federal laws.

In the spring of 2020, the defendant reportedly signed an affidavit indicating he’d turned over all firearms to deputies with the Jacksonville County Sheriff’s Office. But then, federal authorities were tipped off that he had not actually turned over all firearms in his possession. A special agent with the U.S. Bureau of Alcohol, Tobacco, Firearms, and Explosives (ATF) began investigating, and noticed the defendant also had several firearm silencers that were nationally registered, but not surrendered to the sheriff’s office along with his other firearms and ammunition. The agent obtained a search warrant, which was executed in November 2021. At his residence, agents reportedly found seven guns (rifles, pistols, revolvers), silencers, and thousands of rounds of ammunition. Some of the guns and silencers were not properly registered.

His guilty plea for possession of firearms while subject to a domestic violence injunction was met with a 37-month prison sentence.

State law – specifically F.S. 790.23 – prohibits anyone convicted of any felony from buying or possessing a firearm. The only exceptions are if the gun qualifies as an antique firearm OR the person has had their civil rights AND firearm rights restored (which can only be done by the Florida Office of Executive Clemency). If your felony conviction was in another state, you must have obtained a restoration of civil rights and firearm rights by that state’s government before you can possess firearms in Florida. If you were convicted of a federal felony, you need either a presidential pardon or a grant of federal relief from disabilities.

If a person violates a state-issued final injunction for protection of domestic violence or against stalking/cyberstalking violates by having firearms in their possession, it’s a first-degree misdemeanor, which is punishable by up to one year in jail, $1,000 fine, or both. If the injunction is temporary, the respondent may be stripped of firearm rights, but it’s up to the court’s discretion.

Federal law – specifically 18 U.S.C. 922(g)(8) – bans anyone who has been convicted of a misdemeanor domestic violence crime from buying or possessing guns. An older law, the Federal Gun Control Act of 1968, also prohibits anyone convicted of a felony OR subject to an active domestic violence protection order from possessing a firearm. Even if the conviction or injunction was state-issued (and this includes injunctions handed down in civil court), violations are often prosecuted by the federal government. Violation of this provision carries a maximum punishment of up to 10 years in prison. This is the reason Florida authorities are inclined to allow federal agencies to intervene when there’s a violation – there’s a 9-year difference in maximum penalties.

It should be noted that if you use a firearm for your job, you may qualify for an exception to retain your service weapon. Florida law says that guns may be retained – in spite of a permanent injunction – if the firearm is required in the course of your duties as an active, certified law enforcement officer, correctional officer, or correctional probation officer – whether those positions are full-time, part-time, or auxiliary. (The likelihood of retaining a job of that nature with a felony conviction is very low, though it *might* be possible with a prior misdemeanor or an injunction.)

The best way to protect your right to bear arms is to work with a good criminal defense lawyer as soon as possible following an arrest or request for injunction.

Jacksonville Man Sentenced To More Than Three Years In Federal Prison For Possessing Firearms While Subject To A Domestic Violence Injunction, March 8, 2022, U.S. Department of Justice