A retired Broward County Sheriff’s deputy who survived a gunshot wound to the head during a traffic stop five years ago, has been arrested on charges of domestic violence battery by strangulation against his estranged wife. 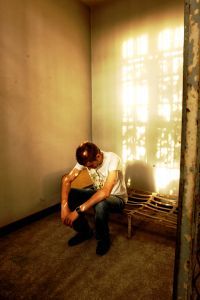 Fort Lauderdale domestic violence defense attorneys know that this charge is a third-degree felony under FL Statute 784.041, punishable by up to five years in prison.

It’s a serious charge that requires prosecutors to prove that the defendant knowingly and intentionally, against the will of the other person, impedes the alleged victim’s normal breathing or circulation by applying pressure to the person’s neck or throat or by blocking the person’s mouth or nose. It’s considered a domestic violence situation if the relationship between the accused and accuser is familial or dating or if the two share a household.

In this case, the pair had been married just three months and were allegedly arguing over whether their young son could or should stay with his paternal grandparents. Police say when the mother reached in to the vehicle to retrieve their son, the retired officer began pushing her from where he sat in the driver’s seat. He then reportedly grabbed her by the neck and applied pressure to the point that she was unable to breathe. It’s not clear whether he actually got out of the vehicle at any point during the alleged altercation.

The woman reportedly went to her parents’ home and immediately called police, who noted visible scratching and bruising on her throat.

However, defense attorneys for the former officer say that the residual effects of that shooting five years ago would have prevented him from carrying out that assault.

The traffic stop in which he was shot involved a convicted felon who reportedly owned a handgun. The felon had just learned that his probation officer knew about the gun, and was determined not to return to jail. When he was stopped, he responded by shooting the officer at close range in the head.

The officer required numerous surgeries and rehabilitation, during which he regained his ability to speak in both Spanish and English. Doctors called the recovery “miraculous.”

Then last year, while he was off-duty at an ice cream shop with his mother, he said a homeless man approached the two and assaulted his mom. He said he ordered the man to stop, but he would not. In the end, he said, he was forced to shoot him. The man survived, but no charges were ever filed.

The police report in this most recent case makes no mention of whether the officer’s traumatic head injury played a role in what happened. In fact, defense attorneys are denying the alleged victim’s allegations. But if the evidence at some point indicates that he did somehow assault his wife, defense lawyers may consider approaching it from the perspective that the head injury had impaired his judgment, and he therefore should not be held entirely or at all responsible.

This same reasoning could be potentially applied in domestic violence cases involving soldiers or others who have suffered some sort of severe trauma to the brain. It’s estimated that some 1.7 million Americans experience a traumatic brain injury each year, according to the Centers for Disease Control.

A 2011 study conducted by the University of Michigan, Ann Arbor indicated that young adults who have suffered severe head injuries were more likely to be involved in a physical altercation or participate in some other kind of violence. The findings were presented in the journal Pediatrics.

Researchers found that severe brain injuries may cause changes with regard not only to a person’s memory and emotions, but also their ability to reason and control impulsiveness and aggression.