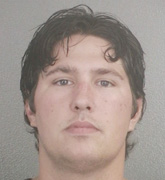 Police chief Frank Adderley stated that “This is not representative of law enforcement officers, particularly Fort Lauderdale police. When we find indications of crimes being committed, we investigate.” I agree with the Fort Lauderdale Police Chief Frank Adderley that crimes such as this arrest may not necessarily be “representative of law enforcement officers.” However, I do believe that those who head police agencies such as the Fort Lauderdale Police Department are too often quick to dismiss alleged criminal misconduct committed by those sworn to protect and serve. For example, remember Florida Highway Patrol Trooper Paul C. Lawrence? This is the Florida Highway Patrol Officer arrested for falsifying hundreds of traffic citations? It was only after dozens of complaints about the Florida Highway Patrol Officer before an investigation actually initiated.

In this case, Fort Lauderdale Police Officer Justin Krashefski purchased drugs while claiming to be involved in a “police investigation.” He demanded that a man meet him where he purchased the drugs. That man happened to be an undercover police informant. Needless to say, the informant brought this to the attention of the authorities. Police set up a sting operation where an undercover informant met Officer Krashefski. At this meeting the Officer purchased five Oxycodone pills from the undercover informant.

In this case, Officer Krashefski was clearly motivated by addiction more so than the common corruptor of law enforcement; greed. Oxycodone, is a powerful and under-recognized narcotic that has arrived as a plague to our nation. Regardless, as a criminal defense attorney here in Fort Lauderdale dealing with drug crimes, my expectation is simple. All cases involving Fort Lauderdale Police Officer Justin Krashefski must be reviewed by the Office of the State Attorney of Broward County and dismissed where warranted.