Words like “kidnapping” or “false imprisonment” immediately conjure images of a person being bound and blindfolded, unable to escape a cagey stranger’s clutches. But more often, false imprisonment charges in Florida stem from incidents alleged domestic violence. Rather than tying someone up, false imprisonment looks more like forcing someone to stop and just listen to your side of the argument – something that can seem like a reasonable action, especially in the heat of a spirited disagreement. But it’s a felony, and should be taken seriously. 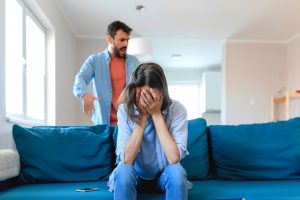 False imprisonment, as defined in F.S. 787.02, is when someone without the legal authority to do so restrains another person against their will. It’s similar to kidnapping, except the latter is more serious and involves moving another person against their will from one place to another while they are confined. Kidnapping also typically involves the intent to to commit another serious offense (i.e., extortion, sexual assault, battery, etc.).

False imprisonment is a third-degree felony, which carries penalties of a maximum penalty of 5 years in prison, 5 years of probation, and $5,000 in fines. It may also result in a permanent injunction (aka restraining order), which can have lasting implications for future employment opportunities, firearm rights, freedom of travel, etc. Kidnapping, meanwhile, is typically a first-degree felony, punishable by up to 30 years in prison. It can even be a life felony if carried out in conjunction with other serious offenses.

Penalties can be more significant for either charge if there are aggravating factors – particularly if it was carried out in conjunction with another serious felony, such as robbery, burglary, sexual assault, child abuse, human trafficking, or exploitation of a minor. Prior convictions can also exacerbate the seriousness of a false imprisonment charge.

What Do Prosecutors Have to Prove in a Florida False Imprisonment Case?

As our Fort Lauderdale defense lawyers can explain, the elements of a false imprisonment charge are:

False imprisonment charges sometimes come as a surprise do defendants, particularly if no one was hurt or physically restrained at all.

Some examples of scenarios of false imprisonment in domestic situations:

There are certain defenses to false imprisonment that can be made depending on the relationships between the parties. For example, merchants accused of false imprisonment may detain someone for a reasonable amount of time on suspicion of retail theft. They can only do so long enough to make a reasonable identification, inquire as to whether the person has possession of unpurchased merchandise, and inform a police officer. Similarly, parents and caregivers can defend against claims of false imprisonment where children under 17 are concerned where they are responsible for assuming control of the child’s welfare.

But in the context of domestic violence, some common defenses to false imprisonment charges in Florida:

If you’re accused of false imprisonment in a domestic violence case, it is imperative that you consult with an experienced criminal defense lawyer as soon as possible to help you navigate the criminal justice process. We have an extensive track record of successfully helping criminal defendants avoid felony convictions and the serious consequences associated with these charges.